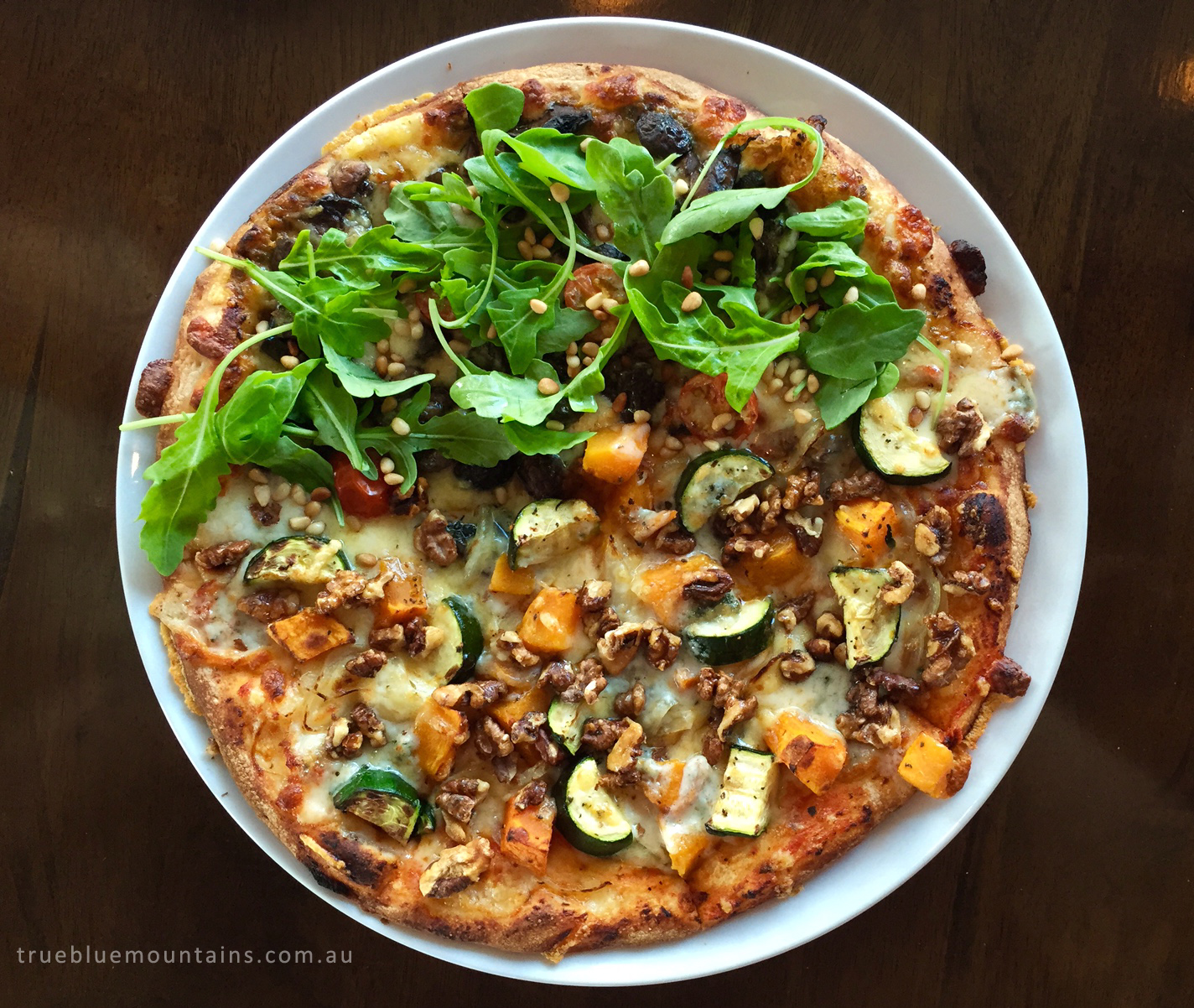 Pizza perfection … half Luna Blu and half Mushroom Magic at La Famiglia.

This little pizzeria was originally the combined vision of a fine-dining chef and restaurateur duo.

Their ship has since sailed, but the essence of what they created remains: premium quality ingredients, unique pizza toppings and friendly service.

La Famiglia in Wentworth Falls was once rated by one of my Airbnb guests from Melbourne – who is also in the food industry – as the best he’s ever had. If that theory is not begging to be tested out, then I don’t know what is.

On the menu is pizza (gluten-free bases available), pasta, risotto and salads, and a focus on offering locally produced beverages. As well as Australian and international wines the menu features whites and reds from Orange and Bathurst, and will soon offer a merlot by new Megalong Valley winemaker John Darragh. I also noticed a German-style wheat beer from boutique brewery Borenore Brewhouse in Orange on the specials board.

The restaurant is small and it’s all bar-stool-style seating, so you might not be inclined to come for a long, slow, multi-course meal, but the food and wine will probably appeal so much that you will end up doing so.

When we visited we were in and out because we had to catch a movie at Mount Vic Flicks, which regrettably meant I couldn’t try a great deal. But what I did try gave me a taste of what my Airbnb guest was on about.

There are classic topping combinations you just don’t mess with, and there are some begging for a little more flair, which they have delivered. One pizza demanding attention is the Pork Fest with maple-baked pineapple, smoky leg ham, buffalo mozzarella, balsamic onions and pork crackling. Pork crackling on a pizza? Genius.

We were in a more vegetarian mood and so were tossing up between the Luna Blu, topped with gorgonzola dolce, roast pumpkin, zucchini, caramelised onions, buffalo mozzarella, sage and candied walnuts; and the Mushroom Magic – buttons and portobellos on a pesto base, bocconcini, cherry tomatoes, fresh thyme, toasted pine nuts and wild rocket.

Pork crackling on a pizza? Genius.

Thankfully we didn’t have to paper-rock-scissors to decide because you’re allowed to order half-and-half. You can even add extra toppings if you wish.

We shared one pizza for an entrée (all pizzas are 12 inches), and each had a pasta for main. Just to be clear, I would usually only have one slice for entrée, leaving the rest for my husband whose incredible appetite is the stuff of legend here in the Mountains. However, I couldn’t stop at just one, and after giving my main dish – the linguini marinaro – a good go, I came back to polish off a couple more pieces. So thin and crispy was the base and so gooey and flavoursome was the cheesy pumpkin topping that my satiety gauge just gave up trying to stop me.

Our pastas were both beautiful (Mr E had the Fettuccine Alfredo – a mushroom ragu with baby spinach, rosemary, nutmeg and cream) but they were upstaged by the pizza.

I didn’t have dessert because I was ‘saving myself’ for a choc top at the movie, but alas, alack – I was too full.

So, is it the best pizza I’ve ever had? Maybe I’d better go back for another several slices just to make up my mind…

Where’s the best pizza you’ve ever had? Did you love La Famiglia as much as me?