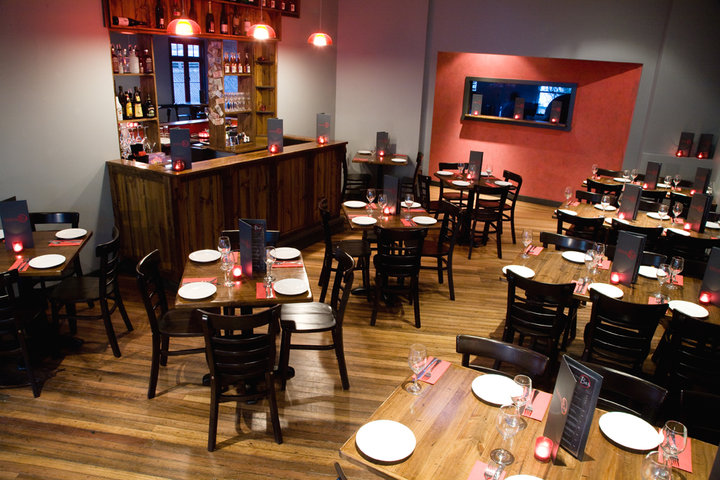 Fantastic pizza, a great atmosphere, craft beers on tap and the high chance of live music later on make this pizza place in Katoomba one of the Blue Mountains’ best casual eating spots – perfect for families and groups of friends.

The pizzas are all named after towns in the Blue Mountains and are listed on the menu in the order they appear as you drive up from Sydney. Featuring a mix of classic Italian and contemporary Australian toppings, each pizza has loads of appeal, from the ‘Mt Victoria’ – macadamia nut pesto, pine nuts, field mushrooms and fetta with rocket and parmesan – to the ‘Woodford’ – Roast duck with mushrooms, baby spinach, red online, sesame seeds and sweet Kakadu plum sauce.

I often wonder if the chef has tried to encapsulate the villages’ personalities in the toppings… As a Bullaburra local I’m proud that our namesake pizza is the most unusual of the bunch – saltwater crocodile with wild lime and ginger marinade, coconut cream, baby spinach and roast red capsicum. If you’re curious about trying native Australian meats this is a great way to sample them in the ‘safe’ context of pizza. If the ‘Bullaburra’ sounds too quirky you could try the ‘Warimoo’ – shaved kangaroo fillet marinated in shiraz and peppercorns on bush tomato with chilli, jalapenos, baby spinach and roast red capsicum.

Other pizzas have an Indian or Asian bent, but there are familiar combinations too, including my favourite – the ‘Lawson’, prosciutto, salami, field mushrooms and buffalo mozzarella.

The one underlying highlight among all these unique pizzas is the thin and crunchy woodfired pizza base – it’s one of the main reasons this place has as good a reputation as it does.

What drink goes best with pizza? Many would argue ‘beer’ and the Station Bar owners have certainly made that a focus in the bar. A selection of craft beers (and a cider or two) from micro-breweries around Australia is always on tap, from dark ales to draughts, ginger beer and a Pink Lady apple cider. The wine list is mostly Australian and among other regions contains a handful of whites and reds from nearby Mudgee, Orange and the Hunter Valley.

With both bar and restaurant seating you can be as contained or as social as you like. And if dinner (and your sampling of those craft beers) does carry on into the night there’s often live music starting up around 9pm. It gets pretty busy around this time, but the atmosphere stays civilised and fun. Check Station Bar’s Facebook page for details of upcoming gigs.

Parking tip: Driving from Sydney/lower Blue Mountains, turn left off the Great Western Highway onto Goldsmith Place (near Hotel Gearin) and park at the train station car park. Walk under the railway line; Station Bar is on your right.